You are here: Home / Blog / Maria Montessori on the Mass 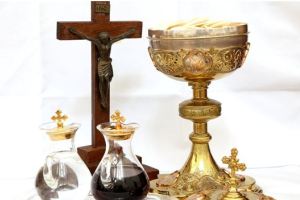 In some circles, it is not well known that Maria Montessori was Catholic. Two of her writings specifically addressed her Catholic Faith: The Mass Explained to Children and The Child in the Church.

What follows is an excerpt taken from her 1930 edition of The Child in the Church, on the topic of Instruction of the Holy Mass in the Atrium.

“As Dr. Montessori is at present engaged in the preparation of a children’s Missal, her ideas as to how best little children should be taught to understand and participate in the Holy Mystery of the Mass, will be only cursorily touched on here.1. “

Suffice it to say that the Dottoressa regards this matter of such importance that she would arrange all the work of the Atrium to be, as far as possible, Misso-centric.  “For,” she says, “just as all the child has to learn in the various multiplication tables is found in, and summed up by the ‘Table of Pythagoras,’ so all that is essential in Christian instruction is, in some way or other, connected with or summed up in the great central rite of the Mass.

This may seem a strange statement to Protestant readers, but that is because they do not realize the significance of the Holy Eucharist to Catholics.  For the Mass is, as it were, the meeting place and summing up of many different lines of thought and action.  It may indeed be compared to a diamond with innumerable different facets, so that from whatever point of view it is subjected to the light of thought, it reflects back a fresh significance.  Thus, historically, it may be regarded as the consummation of the Old Law, and the beginning of the New Testament.  It is the Sacrifice of the new Law, daily offered up for the sins of the world.  Looked at in another way, it is a marvellous (sic) epitome of the Birth, Life, Death, and Resurrection of Our Lord.  In the prayers and readings of the book of the Mass (i.e., the Missal) the Church has preserved for us the most beautiful hymns and prayers of the Saints, and the very quintessence of the Scriptures.  In the ceremonies and setting of the Mass, all the arts – music, poetry, painting, sculpture, architecture, even the drama – have given of their best to pay homage to the Supreme Artist.  The common elements of life – bread and wine and water are taken up in It as essentials; and the most precious products of the earth – the spices of the East, gold and silver and precious stones – are added thereto in the vain hope of making a setting worthy of the Eucharistic miracle.  The Mass forms the common focus of our collective worship, but is at the same time to us, as individuals, our Daily Bread.  But It is not only the meeting place of all Catholic worshippers (sic) on earth; for, in the Holy Sacrifice, the Church Militant is united to both Church Triumphant and the Church Suffering – the Angels and Saints in Heaven fall down before the Sacred Host on the Altar, and the merits of Him Who is offered there are applied to the Souls in Purgatory.

These are only some of the aspects from which the Holy Mass can be considered.  They can all be summed up in the saying that in the Mass we have Emmanuel – God with us.  Here, in sacramental form, we have the continuation of the sublime mystery of the Incarnation.  And this is why the Mass is, and has always been, the central dynamo from which there streams, as from an inextinguishable source, the undying energy and vitality of the Catholic Church.  It will be readily seen then why, believing all this, Dr. Montessori regards this subject of such importance, and would make it so prominent a feature of the life in the Atrium”.

1. The Mass Described and Explained to Children, by Maria Montessori (Sheed & Ward)

Furthermore, those who are unfamiliar with the foundational work of Maria Montessori in Catholic catechesis often criticize the Atrium, the prepared environment where the young children are introduced to the primary doctrines of our Faith.  They think it a quaint way for children to engage in religious play, but that is far from what Montessori herself envisioned, as shown in the following short dialogue (The Child in the Church, 1930 edition, p.47-49).

Question: “Would you approve of the use of little model altars for the children to learn about the Mass?”

Dr. Montessori: “Yes, we had them at Barcelona.  I think these models may be very helpful so long as they are used in a proper way.”

Question: “What do you mean by a proper way?”

Dr. Montessori: “Well, to begin with, the model altar must never be confused in the child’s mind with the real thing.  The models should only be used for learning the names of things and their uses (emphasis original).  They must never forget, for instance, that a real altar contains an altar-stone with some relics of the Saints, and that a priest could not say Mass without such a stone.”

“Care should also be taken that the child’s preoccupation with the model altar
does not degenerate into a mere game.” 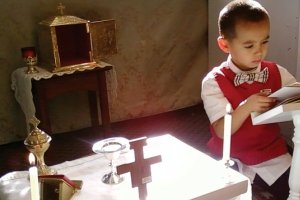 “In this connexion [sic], too, I would recommend the use of the cardboard models, published by the Liturgical Apostolate (Abbaye de St. André, Belgium).  These have been made to illustrate the different actions of the Mass, showing the positions of priest and acolytes at the important moments of the Mass.”
. . .
“. . . I would have the children follow as far as possible the actual words and ceremonies of the Mass, and not content themselves with reading special books of devotions.  The latter may be very good in themselves but they can never take the place of the actual words of the Mass.”

Even though I was trying my best, I was once a frustrated mom.  Being blessed with learning about Catholic Montessori, I assisted in founding a Catholic Montessori school and transitioned to being a happy homeschooling mom after moving away.  Read more . . .

Get notified about new blog posts!

I may occasionally recommend items that I’ve found helpful in our child raising and home life.  Hyperlinks on these item names link to external sites, such as Amazon.com, that have their own privacy policies.  As an Amazon Associate, I earn from qualifying purchases.  This means that I may receive a small commission, at no additional cost to you.  Thank you for supporting my site!

Send us a note here.  We love hearing from our visitors!

This website uses cookies to improve your experience while you navigate through the website. Out of these, the cookies that are categorized as necessary are stored on your browser as they are essential for the working of basic functionalities of the website. We also use third-party cookies that help us analyze and understand how you use this website. These cookies will be stored in your browser only with your consent. You also have the option to opt-out of these cookies. But opting out of some of these cookies may affect your browsing experience.
Necessary Always Enabled

Performance cookies are used to understand and analyze the key performance indexes of the website which helps in delivering a better user experience for the visitors.

Analytical cookies are used to understand how visitors interact with the website. These cookies help provide information on metrics the number of visitors, bounce rate, traffic source, etc.

Advertisement cookies are used to provide visitors with relevant ads and marketing campaigns. These cookies track visitors across websites and collect information to provide customized ads.

Other uncategorized cookies are those that are being analyzed and have not been classified into a category as yet.

SAVE & ACCEPT
Would you like a reminder? Please enter your valid email address below.